Dinner And A Show

A Piece of Theatre Review with some Good Wine.

Updating the Present: Review of STC’s The Present

It’s becoming a bit of a sad tradition that we’re seeing a lot of main-stage plays be subtitled with, ‘by some-would-be-writer, after some-undisputed-master’, as if the works of Ibsen, Chekhov and Miller were pretty good starts, but really hadn’t quite reached their full potential. It’s either an indictment against Australian playwrights who don’t have the balls to write something of their own, or Australian audiences who are unwilling to see anything they haven’t already heard of. Possibly a bit of both.

The Sydney Theatre Company’s The Present, ‘By Andrew Upton, after Anton Chekhov’s Platonov (1878)’ is another member of this ever growing club. However – and it is a big ‘however’ – of all the plays out there this is possibly the best one to do it to. Written when Chekhov was just eighteen, the piece originally ran to five hours, with Chekhov himself never considering it complete. It was never staged in his own life-time, and when performed today usually appears as an abridged or edited version. Upton has condensed the story and updated the setting to Russia of the mid-1990s (yes, we remember, VHS was a thing). Having said that, the sensibilities of the characters within the piece are undeniably Australian, even setting aside the accents; Upton’s use of dialogue and even the mannerisms of the actors all place the aesthetics of the piece squarely in this country. At one point, a character even picks up a meat pie from the local servo. The occasional references to Russia jar at times as we’re reminded that this isn’t Oz, and one wonders how difficult it would have been to have found a comparable time in Australia’s history where the story would have worked. Thankfully, though, this is not a deal breaker.

Credit must be given where credit is due, though, because for its faults, The Present is an engaging piece of theatre. It may not sound much like Chekhov anymore, but for the most part the writing works; the comedy inserted into the text and accentuated by Director, John Crowley and his cast, turns what might have been a slog of three hours into something entertaining. 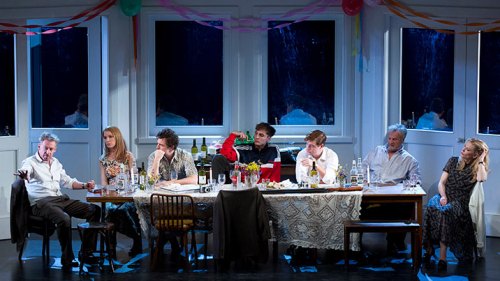 The play opens on the day before Anna’s 40th birthday. Gathered for the first time in years is a group of friends who are all connected through the friendships forged by their own parents many years ago. The relationships are complex, but Sergi, Nikolai and Mikhail are three sons born of the previous generation who spent their childhood together. They all started out with the potential to change the world, but following one compromise after another they have lapsed into a lack-lustered middle-age. They are surrounded by the stories of the glorious past, and listen to the plans that the youthful have for the future. But when you’re middle-aged you only have the present: whatever you were going to do, whatever you were going to be is what you now are; it’s only at 40 that people begin to fully realize this. Mikhail had big plans for his life, and even though he holds down a respectable job as a teacher and has a newborn child he feels unfulfilled. Enter the women. Mikhail is a bit of a babe magnet, and over the course of the play there are four who believe themselves to be in love with him. Each represents a different aspect of his life that he feels is lacking: Sasha, his wife, is warm and nurturing; Sophia is ambitious and wants to improve the world; Maria is young, sexy and vibrant; and Anna is the person who understands him. Mikhail’s frustrated life, his attempt to recapture a lost youth and potential in one of these women, and his inability to choose between them, makes up the drama of this piece.

Even with Upton’s stripped down and rebuilt version of the play, it’s hard to disguise some of the limitations in this early Chekhov. The four female love interests are a little pigeon-holed into their character-types and what they mean to Mikhail’s crisis than they are fully rounded characters. This is more so the case with Maria and Sasha, but all four suffer from this limitation to one degree or another. Likewise, the first two acts are a little over drawn and not as tightly wrought as the back end of the production. It is fascinating to note, though, that Chekhov, at eighteen, managed to write what is a detailed study of the mid-life crisis.

But let’s face facts, at the end of the day this is a little bit of a show piece of the STC. As such, there is no lack of star power in this production. Cate Blanchett takes on the role of Anna Petrovna, birthday girl and widow to a late General. Blanchett heads this production with A-list stamina, once again demonstrating the energy and skill required to successfully navigate theatrical marathons, such as this. Blanchett is always transfixing, though one laments the missed opportunity to see her tackle Chekhov’s heavier drama over Upton’s amusing but light comedy stylings. Richard Roxburgh is similarly magnanimous as tortured womanizer Mikhail Platonov. Roxburgh could make a shopping list seem interesting and natural in conversation. And it is this performance, one of great ease and ochre charm, that sees us once again delight in Roxburgh’s treading of the boards (though he leans perhaps a little on the character of Rake for guidance). Whilst all the other actors put in some good performances, both Roxburgh and Blanchett left them a little in the dust. Chris Ryan was sweetly naïve as the lovesick Sergei Pavlovich. His best moments occurred when he moved out of daft comedy bits and into wrenching desperation. Toby Schmitz was suitably jarring as the sarcastic and indecisive Nikolai Ivanovich, though one would like to see him do some further character work. Jacqueline McKenzie was surprisingly unrecognisable as the quiet though enthusiastic Sofya Yegorovna, wife to Sergei and an old lover of Mikhail. Hers was a wonderfully measured and subtly nuanced performance. Susan Prior was also excellent as the plain Sasha, doting wife to the often uninterested Mikhail. In the role of her father, Marshall Napier was barrelling and jovial; a joy to behold. Also worth a mention is Brandon McClelland as the Demitri, son to Porfiry, who struck a chord as the outspoken, sullen youth who challenges Mikhail’s antics.

The Present is a great opportunity to see a raft of Australia’s stage talent strut their stuff on stage. It would be unwise to go in expecting to see a Chekhov play, but nevertheless, this is an engaging and entertaining piece of theatre. Get tickets if you can.

The Present is playing with the Sydney Theatre Company until the 19th of September. For more information see: https://www.sydneytheatre.com.au/whats-on/productions/2015/the-present

This is what we think, what about you? Cancel reply